A BIT MORE BLUE IN GREEN

A vast similitude interlocks all
..... and shall forever span them ...... Walt Whitman, On the Beach at Night Alone 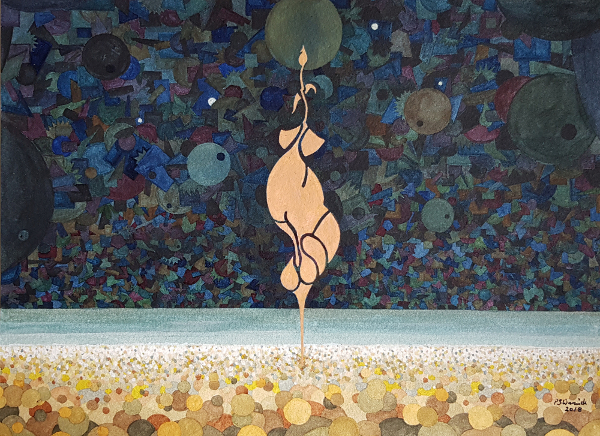 Born out of womb warm pre-consciousness
Chipping at the boundary to existence
Brittle at term
Armed only with egg teeth for levers
Spurting promiscuously from sense grains
Spat into the countenance of a vicious reality
Universes spasm into being
And reveal our emergent selves
Urgent for being
In all their glorious arisen natures.
Go mindfully with yours
Down to the wild edge tender
Paying all due respect to the gravitas of ignorance
Down to oceans of knowing on their love lapped shores
(Being wary of gloves holding four fingered facts)
To interstices among and the force that contains them
To the places beyond and the spaces before them
(Being wary of palms under Antarctic skies
And coinage dissembling under 9 carat plate)
Go consciously imperfect and impure of thought
Contentedly aware but deliciously empty.

Go to the becoming in the deep of the here and now
For what happened happened
Is happening still
And all of this is all there is
Every least and last particle of it
Every shape and angle of it
Every height and distance of it
The movement and the pace of it
The sequence and the blink of it
The rate and the change of it
The start and the death of it
Happening forever without beginning or end.

New comments are not allowed.

Paul Warwick
Paul Warwick - an opinionated old fart, strident but well meaning and sincere. Busy with my one and only life. Thinks, paints, writes. Blogging for fun and showing off. Putting it out there before dementia sets in. Godfree Finker - God free and self sufficient. Free of false hope, superstition and brain washed supernatural beliefs. I am sometimes sad but always contented with life. It is what it is. Evidence and the one eyed man in a blind world are kings. Rafe Beedeeeye - I sit at the table holding my council, watching, observing, contemplating and deliberating, learning and growing. I bite, I kiss but I cannot lick. I speak out of necessity. I mince no worms, tell no porkies, take no prisoners, eat no hats.