As avid and observant readers of this gripping journal have probably noticed they have not lately been regaled daily with my outpourings, not consistently anyway. There is a reason for this: not bothered. It is all getting rather tedious.

Admittedly we consciously chose to be as cautious as we were the first lockdown. Many people did not follow our example and judging by the vast numbers of vulnerable and elderly folks now dead or seriously ill we made the best choice. It was pretty obvious that there would be a second wave and that both the late start to lockdown and its premature termination with sufficient infected people out there, many of whom were asymptomatic, to make conditions for the duration of this last lockdown much more dangerous than the first.

The government have spent £12billion with a private company to implement a test and trace system, a vital defence against a second wave, but this has turned out to be unfit for purpose. (Apart from a disgraceful waste of tax-payer money).

My theory was simple. The first wave started with just a few cases brought in no doubt by travellers. Ending Lockdown 1 prematurely kick started the second wave with literally thousands of infectious people out there. Then, by allowing social drinking and other establishments to open, created just the right circumstances for vigorously infecting thousands more with this by now overjoyed little virus particle. A second wave was a given because of the way the first was handled.

So we stayed indoors and out of the way aided by and very thankful to our local Tesco for deliveries to the door.

As a general summary I think we have been a little desultory and underwhelmed by this second period of confinement. For the first, we were “up for it” as they say, and “on it”. Now it seems to be all eating, sleeping, doing the shopping on-line, putting the shopping away, Tweeting, blogging and Facebooking.

Part of the problem is winter of course and early nights. The garden is getting its winter tidy up, bulbs are mostly planted, but other than that not much is happening while it takes it’s seasonal rest. We are not able to stay out there all day and long into the evening as we could in the summer months.

Jigsaw puzzles have lost their charm. We started one on the 3rd day and it has proved to be a bit of a bugger to say the least. I took a late walk up the top to check the greenhouses and here is my indefatigable other half slaving away on the most difficult puzzle we have ever attempted. 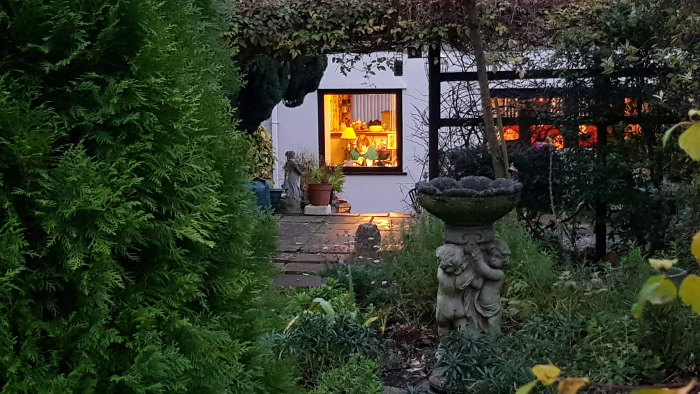 And this is the sum total of progress so far in 21 days. 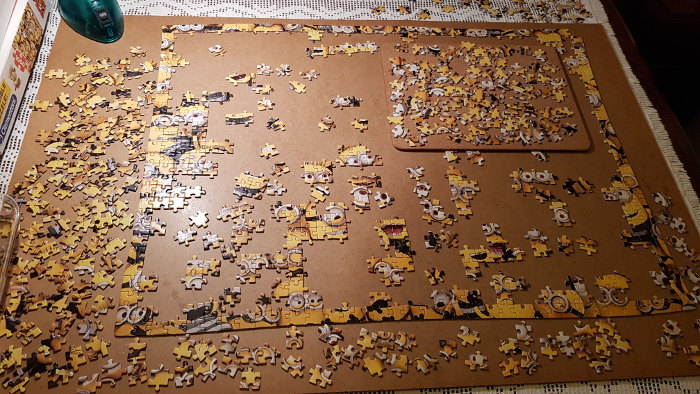 Variety is what we are missing. Variety and that most illusive of all human needs, freedom. It is a strange feeling indeed but even when we are out we can feel it in others as much as in ourselves. Rules are fine when there is a fully understood purpose and it is for our own good but this only works for so long. After a while it feels like a hollow, empty and soulless repression. I imagine the same feelings are apparent in populations under a repressive dictatorship and that maybe explains the joyless atmosphere I experienced directly travelling in East Germany and Russia in the 1970’s.

I have two writing projects and two painting projects in progress which are getting scant attention. It seems that once you slip into a desultory mood motivation drops off equally for even the activities you most enjoy and this combined with another concern regarding physical inactivity is a double whammy. The less you do the less you want to do. Or at least that is how it has affected me, I say that because my wife seems to be coping a great deal better.

Lockdown 2 has now officially ended this 2nd December and we have transitioned into a tiered restriction regimen which is just a continuation of Lockdown in all but name. In the Swindon area we have been allocated to tier 2. We feel the same more or less. We had a late breakfast out this morning and coffees simply to break the spell.

As I have now set the pattern for mostly ad hoc blog posts I shall continue with occasional blog posts but with the title Back In The Covid - Tier 2. This feels like a low point. I hope it is an inflection and that future posts reflect a more upbeat attitude.

In the meantime, gives self a determined and meaningful kick up the arse.