Started on the 8th December here is an update on progress minionwise. No puzzle has ever taken us more than 7 days, our new target is to complete this before 2021. 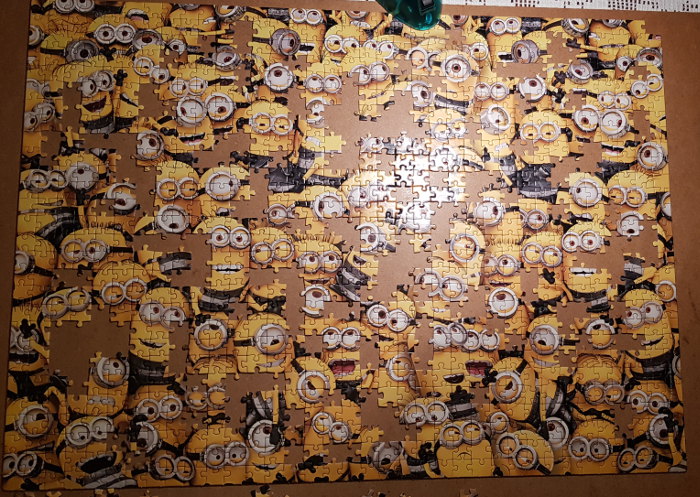 I have not actually been at all inclined to do anything but sleep a lot since my last report. I thought the suspected Covid was more or less done with but no, it got worse, much worse. All the unpleasant details are not too interesting but let me just record that I have an ECG test booked for 30th December and blood tests to check for underlying cardiac issues. It has not been a good few days. My GP assured me that there there was no immediate danger of me pegging out any time soon, but just please avoid this disease at all costs and more importantly treat other people with respect. Behave as though you are carrying the virus  at all times. We have both, my wife and I, been extremely cautious and have worn our masks conscientiously. It is a little sobering to think that my wife has been more or less without symptoms and I seem to have had a false negative test. It would have been so easy to unknowingly infect someone else, someone close. When I described my symptoms to my GP she said that she would have come to the same conclusion. I have had Covid - 19 and its a bugger!

Talking of buggers, that unkempt, mendacious, 14 year old, racist clown that holds the top office in the land has made a big public deal out of agreeing a trade agreement with the EU. I have read it and it is a disaster. The EU seem to have agreed to a deal more a less the same as Teresa May’s plan (that the lying charlatan resigned over) by introducing monitoring arrangements equivalent to what the European Court would have adjudicated on but in new bodies with other names.

This must be the first trade agreement in the history of the world where one side has sought to force trade sanctions upon itself, caused itself a loss in GDP of an estimated 6% and in which the paperwork to export goods to our largest market imposed by this agreement (which was zero) will be prodigious. Services and the financial sector (by far and away our most important exports) have not been addressed.

Perhaps the most damning part of the whole thing is that academic qualifications are no longer mutually recognised. In the middle of a worsening pandemic when there is already a shortage of qualified doctors and nursing staff that is surely nothing short of suicidal. As with our withdrawal from the Erasmus scheme it is an act of disgraceful pandering to those who want to isolate Britain from the rest of the world for purely ideological reasons. It’s purpose is to prevent UK professionals seeking work in the EU. It is, like Brexit itself, a deliberate act of imprisonment placed on UK nationals.

Brexit is not yet done, the after effects will be massive, waves of disruption and the fallout will go on for years. But Vive La Resistance! The fight to Rejoin has already begun.

Handing over now to ‘Back In The Covid, Lockdown diary Tier 3’. Yes, we have been promoted to the third division. Almost no difference for us to a full national lockdown which I am sure will be announced soon thanks to a rampant new variant which has become known as the English Mutation by Europeans. I suspect that this is deliberate payback started by the Spanish to get back at us for calling the 1918 pandemic the ‘Spanish’ flu. A name invented by the British Government to avoid getting the blame for returning it to the UK from the trenches of WWI.

This time it genuinely is the English Mutant a name which would be equally as fitting for our neo-fascist prime minister.