BACK IN THE COVID

The best thing about long Covid is that if you have it then you survived short Covid. I have it! Everything else, in fact most aspects of everyday life, went to the wall including this blog.

We survived short Covid pretty well, the wife escaped almost untouched, myself not so lightly. After a few days of strangely unusual headaches I coughed so violently for a week that it was necessary to clutch my abdomen to limit waves of pain accompanying each spasm. A now permanent ‘floater’ has appeared in my right eye. Neither of us had a fever. My cough stopped as quickly as it started and after a few days of ‘productivity’ (as I euphemistically call the snots) it was done!

Several days later ocular issues became apparent, dry, sore eyes and a new sensitivity to bright light but this cleared up quite quickly as the days went on however at about day 20 I would say, my old ticker started banging off under my ribs at various times in the day and breathing began to be a little laboured. At the same time my heart felt like, it was missing beats, worst case one beat every three was being dropped, and I felt so tired that I could and often did fall asleep for more than an hour once or twice a day.

All energy, inclination and motivation disappeared and most challenging of all my cognitive faculties were struggling and confused. I struggled through a weird, but pretty Covid safe, alternative to Christmas and presented myself for an ECG and blood tests on the 30th December.

All forms of caffeine have gone from my diet. It has been a daily struggle but I am now trying to steadily increase activity levels to attempt to return to a more normal level. Progress is damned slow though, writing has been so near impossible I have not bothered to try (until today). Four days ago some paint was applied to a canvas. A token gesture to be sure and more to do with wilfully defying natural laws than to any level of solid enthusiasm but I took that as a positive step.

I am told that my problem seems to be ectopic heart beats aggravated by Covid-19 now mixed up with anxiety symptoms thanks to my PTSD. Tomorrow I have a 72 hr Holster monitor fitted to find out exactly what is going on.

I must report that I do not feel there to be an impending imminent death situation coming any time soon and I am improving albeit ponderously slow. My GP did not seem to be overly concerned either but to be fair she does have a pandemic to deal with. On the whole I am actually more frustrated than either worried or distressed.

Apart from being denied my strong black coffee that is!

Tier 3 lasted until 26th December when Tier 4 came and went and on January 5th we all entered lockdown 3.

Here we are then on day 16 of Lockdown 3. Trumpty Dumpty has made his more or less unceremonious departure from the Whitehouse after shitting on the top seat of the democratic civilised world and President Biden is enjoying his first day cancelling out at least some of the damage that fascism has done to America. The UK has transitioned into a fascist run plague island where we are all cultural prisoners and poor kids starve while billions of working people’s taxes are spaffed up the walls of the mansions of a corrupt and self-serving master race.

No Brexit dividend has manifested itself on my doormat and dawn over the Sunlit Uplands of a post Brexit landscape have revealed only chaos at the ports, rotting lorries of shellfish and meat, bare shelves in the supermarkets and EU hauliers refusing to ship stuff to the UK. Our main cod fishing boat is unable to catch in Norway’s water and is holed up in port redundant. All the fish in our waters however are happy fish. Happy because our waters are now a safe haven where no fishermen can afford top catch them.

The Sovrinnty lovers and forriner haters are also pretty unhappy because their fascist leaders told them that none of this would happen. How could they have known that fascists lie? How indeed.

Meanwhile this is tonight’s fireworks display across the field from our house at dusk. 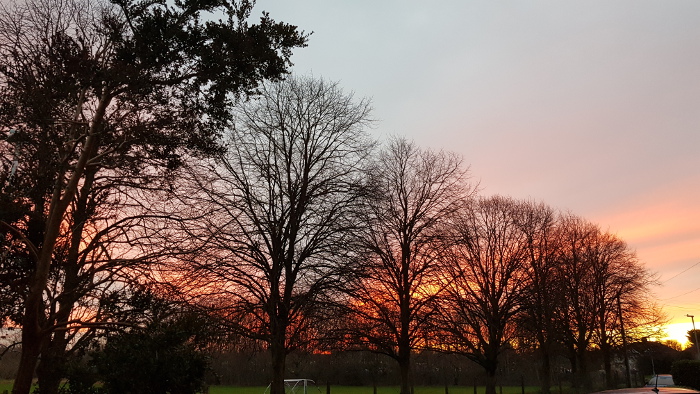 Yes it’s not all bad!

In fact I am quite optimistic. I have a vision of how things will turn out in the long run, an arguably beneficial outcome supported by a number of irreversible, incontrovertible  trends. Expect a diatribe on the subject soon, maybe next time, who knows! In the meantime there is the sky at dusk and in the words of my beloved father “It will all be alright in the end”.