The tangerine tosser has finally arrived at the same conclusion as everyone else and as his denial and anger subside to be replaced with the misery of his reality he becomes one of the losers he loves to despise. The majority of Americans did not vote for more of the same divisive politics of hatred, racial discrimination and violence enabled by corruption and law breaking. His hair turning grey suggests that he has also been dumped by his stylist and it is rumoured that Melania might be intending to dump the charlatan too. Karma it seems is making the most of its moment.

Trumpty Dumpty is letting it be known that he intends to run for office again in 2024 on the grounds that two terms in office is permitted even if they are not served concurrently. Given the scale of his defeat I doubt whether the GOP will allow this to happen unless the party splits but demographic changes are much more likely to rally behind a less extreme candidate. Demographics is a wonderful and sobering force in politics, simple in operation but long term in effect. In 4 years time the older community who voted for Trump will have been replaced by the now 14 to 18 year olds who will not vote for him and who are also unlikely in sufficient numbers to vote for any GOP candidate remotely as divisive or contentious as Trump.

We also, in the UK, thanks in part to the bumbling ineptitude of a Prime Minister obviously out of depth, will benefit from the same forces. Interestingly both elections happen in the same year and probably at roughly the same time.

There is a definite inevitability about this moment in history. Our feudal past controlled by monarchies or religions (or both working together) has been whittled down over the years in spite of this elite establishment trying to keep feudalism in play. This power has been gradually diminished by better and wider education, communications and science through trench by trench warfare over centuries starting with our emergence from the so-called dark ages when religions dominated life and law. Ever wider admission into electoral franchises and the growth of alternative power bases necessitated these old establishment forces morphing into Conservative political parties condemned forever to maintain their support by appeals for stability and tradition but condemned to dissemble the fact that their very existence depends on a political system which allows an asset owning class to maintain and control a poor, indebted working class. I.e. feudalism in all but name or as I see it, economic serfdom or slavery.

But there seems to be (perhaps Iris Murdoch was right!) a dominating underlying force towards the good and away from evil which is, over time, weakening Conservative forces, religions and aristocracies, eroding their power and ensuring that at some point the battle would be obliged to move to open ground.

Open ground is where we are today. The vestiges of feudalism are out of their final trench and it is hand to hand fighting now. Expertise is publicly vilified, corruption amongst the powerful is rife, governments are exploiting, confusing, spreading lies and diversions, flouting the law and testing the confinements of national legal constitutions and norms in a last trench attempt to avoid defeat and relinquish forever their power into the hands of the people. I believe that their defeat was always inevitable. I believe that time will record their defeat as coming earlier than it might otherwise have done thanks to The Covid.

The people of this nation needed the care and protection of those governing them but care and protection has not been forthcoming from those governments nearest in spirit to our feudal past. They have been visibly, sometimes corruptly, protecting and adding to their assets at the expense of the nation’s health, keeping workers at the rock faces of our economy whilst they hole up safely in their sequestered estates organising carts to collect the dead.

Friday the 13th. So this is the unlucky day that just keeps on giving. Trump is gone, the Corbyn faction loses its grip on the NEC, Cain is gone and the scumbag, Grima Wormtongue, the shitweazel in No. 10 has gone too. Something major happened and as usual we have nothing official so the speculation rife on social media is to be treated as a joke. The scrawny Gollumalike boldly left by the front door with a rather small box, retaining his security pass on a lanyard round his neck in a much too contrived theatrical fashion to be believed and even returned later for a photo opportunity, lonely and dejected at a wintry kerbside waiting for a cab, so I intend to restrain my joy until I see the next move. I personally believe that these events are all about Gove undermining the johnson with the aid of the scumbag and Cain (his boys from way back) and scumbags removal is a sign that Gove (and Murdoch) have lost this round. Next will be the removal of Gove from the Cabinet Office and the announcement of an extension to the transition period for leaving the EU. One or the other or both.

You heard it here first.

On the whole it has been a very lucky day for us all.

We took a walk out today, four generations of us, to a local spot quite near to us with both historical and scenic interest but one we do not often visit. Luck is about how much of a fair share you win in this random lottery of an existence of ours but nature in all the chance events that characterise natural evolution and the world about us managed to do this at the Badbury Rings. 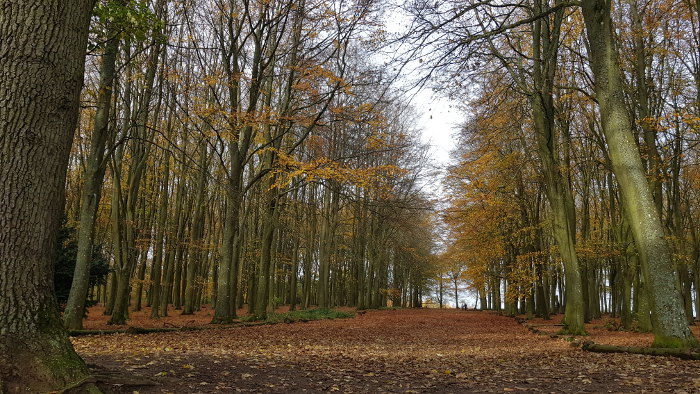 Surely, on the whole, it is a lucky day every day!