BACK IN THE COVID - The Lockdown Diary Day 105

Passer domesticus, commonly called the House Sparrow, is so called because this ubiquitous creature has found its niche with us. Evolution is both constructive for the individual species but risky at times. That this little creature’s relationship with us is entirely symbiotic (in the sense that if the human race had destroyed itself would the House Sparrow struggle to survive?) I find hard to believe. But such is the risk for organisms symbiotic with another thanks to the natural process of evolution.

Not long ago another common species occupying a different niche had the name Hedge Sparrow. Nowadays this bird is called by an even older name, the Dunnock. Back in the day (way, way back in the day) all Sparrows were referred to as Dunnocks. Dun from the Germanic/Old English for greyish-brown and -ock, also Old English, a suffix for a diminutive form of something as in the word hillock. In other words Dunnock was a generic term for all small brown birds.

Luckily we have a pair of Dunnocks resident ‘chez nous’ which have entertained us frequently during The Covid and for a ‘small brown bird’ are far from dull. They play chase-me-charlie round the garden occasionally with Robins and House Sparrows joining in the fun.

Our Dunnocks feed, as do all their kind, on the ground and have learnt to exploit the more acrobatic birds which cling and hang on as they ravage the fat feeder and shower bits everywhere below. Interestingly, back in March when the Actinidium was still without leaves, one of them regularly attempted to scale the branches just like the Robins do with fearless facility but his little heart always ran out of courage above a certain height. Dunnocks inhabit the lower zones amongst shrubs, leaf litter and bare ground round the margins and were clearly nervous of exposure at higher levels.

Today however Mr. Dunnock has surprised us. The question ‘how I could tell it was Mr. and not Mrs. Dunnock?’ is perfectly reasonable. I assume that the one doing the chasing is Mr. Dunnock and this is not an anthropocentric fancy. I have been awestruck by how Mr. Woodpigeon keeps up his pursuit of Mrs. Woodpigeon on numerous occasions all day long and also Mr. Crow has been observed sidling up to Mrs. Crow and trying his moves out up in the neighbours tree.

Today Mr. Dunnock surprised us by launching himself from his usual vantage point on the head of a garden ornament, flew straight at the fat feeder, and flapping and gripping for dear life pecked off a morsel and flew back. Here is a hazy picture of him quickly captured just before his next attempt. 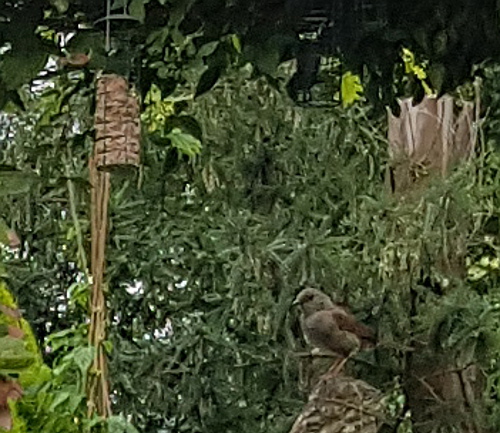 Mr. Dunnock has been practising! Taking his cue from more expert birds Mr. Dunnock has made a gallant excursion out of his evolutionary niche and out of his comfort zone. If his pursuit of Mrs. D has been successful he will no doubt teach this newly acquired survival technique to his kids after also showing an inevitably greatly impressed Mrs. D how it’s done.

I fell to wondering if, in perhaps a few thousand years or so, there will have evolved an entirely new species of small brown bird who are dependent on this skill and living exclusively in this area if we keep up a supplies of hanging fat feeders.

There is a small ginger man living locally who has similarly adapted quite readily to life in The Covid and that is how it should be. Whatever it takes, survival is the name of the game.
Posted by Paul Warwick at 20:55