BACK IN THE COVID - The Lockdown Diary Day 117

The old war wound is now more or less under control apart from a lack of motivation but the healing balm of better sleep, or I should say, the improvements that that brings about, were best consolidated by a few days holding back the grey matter which is, thankfully, still straining at the leash to go out walkies. I won the day and took a few days off.

There have been other battles raging out there in the garden however. For starters I am not winning with the green veggies, the gastropods are, and the small greenhouse has become the favoured domicile of small brown ants and contains a nest of the pesky critters, a nest which is approximately 1200mm long by  400mm wide. I do not have the upper hand with those either.

These are the ants. The same yellow ants that occasionally infest lawns and create piles of unsightly fine earth debris. 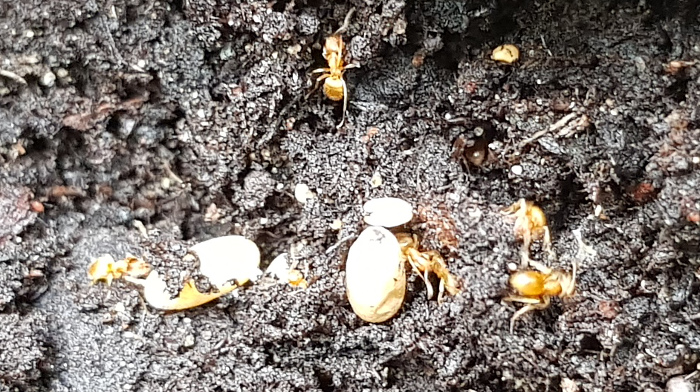 I am now trying out bio controls. For slugs and snails that means parasitic worms (nematodes) which arrive in a kind of suspended animation and having the appearance of fluffy yeast which is first dissolved into a worm slurry and then diluted before being sprayed onto the surrounding soil. These clever little microscopic beasts parasitise their slimy prey which hurry off and die below soil level. In theory, while spraying it all over the place I started to wonder if I hadn’t been conned. If they die underground how am I to know that my investment has yielded a result?

There is only one bio control available for ants, also a nematode that goes by the scientific name Steinernema feltiae. Ants are not parasitised by these worms but they will not, apparently, tolerate living near them. I am not at all certain how this works, perhaps they smell badly or shout abuse at the ants and play loud music day and night. I wondered also how results with these nematodes were to be monitored. In my perhaps naive expectations I imagined an interminably  long line of ants, some carrying their eggs or pupae marching out of the greenhouse by the nearest exit but there is no sign of that.

The Covid is far from over but without major incident. At least not enough to reach the main stream news outlets. These are unreliable in any case since they have either become microphones for an untrustworthy government or have their own political agenda to advance according to whatever their readership and circulation factors demand. Confusion and insecurity is therefore on the increase especially amongst the long forgotten about locked down community. Most humans, primarily due to what is now known as confirmation bias, will quite readily believe that previously held convictions, however strong and decisive, can now be doubted simply because of the counter intuitive behaviour of others. This is especially so if those others are off out carelessly enjoying themselves with their love ones and friends in all the ways you are badly missing. This is probably our most dangerous time. The incidence of infection is higher now than when lockdown was first imposed. It is still out there, infection rates are rising. Deaths it is true are falling but this is due to, and relies on, the fact that those who have been shielding remain shielded and that new infections remain mainly amongst a younger, healthier demographic. Until there is a clear sign that infection rates are reducing we remain vulnerable.

My working life was spent in an industrial engineering environment in which health and safety rules and regulations carried great weight. Lowering our guard now would be like operating a press machine with its guard disabled for convenience. Everything is fine until you lose your concentration and chop your fingers off!

Those who have been shielding must continue to shield until infection rates are shown to be reducing and clearly under control. The risk right now is much too high and for the time being at least, worsening.