Most of yesterday was spent exclusively in the garden, most being that part of the day between rising from my bed and settling down to our evening meal, not a very early start but taking advantage of a considerably improved sleep pattern in the last six or seven days. With little time left for writing I fell to thinking that one useful aspect of The Covid is that deadlines, habits and duties are no longer as relevant and this, if nothing else, is liberating for those of us constantly driven by feelings of guilt when nothing has been achieved. I no longer reflect on a lazy day and think  of it as wasted time. The creative mind needs the luxury to waste it’s time. I have found in those rare moments that two important things happen. Firstly wonderful, beautiful new ideas can arise, sometimes with astonishing, instant impact. Life happens in those moments when time stops as it seems to do when lingering over an upland farmers gate gazing beyond his herd of cows munching their dewy summer meadow grasses and absorbing  the details dotted along distant hills. Secondly, it is in those moments of almost absent minded reflection that the most reliable decisions are made. By me at least.

I finished knitting the clematis yesterday. It takes three days at least, and pruned and shaped the new English oak tree while Mrs Gardener dead headed and planted a few shrubby perennials which were long overdue. All very quiet and restful and as it should be. Here is the whole thing in a view looking back towards the house this time. 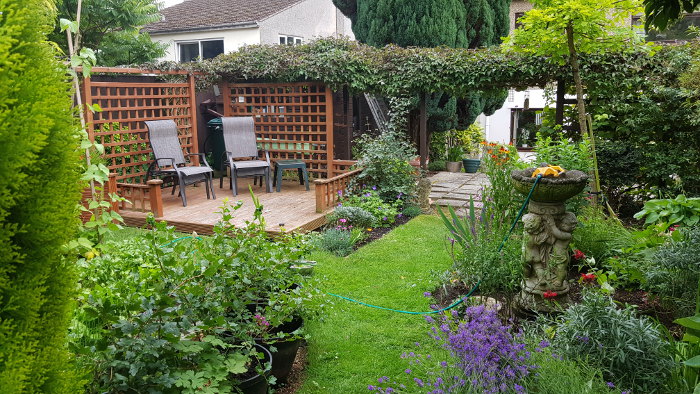 This clematis plant grows from the ground in the corner behind the deck (watered by the overflow from a rain collection system) and as can be seen not only extends across the full width of the garden but is now being trained to adorn the two sides of the deck.

Today has been dull and overcast hence the extra luminous greenness. I had popped out between showers to pick dinner from the now verdant veg patch which apart from bolting spinach (the heat!) and lettuce which did not thrive and a 50% pea failure is proving to be The Covid’s finest reward so far. A benefit which might soon come into its own when the ultimate disaster of leaving the EU without a deal transpires at the turn of the year. Dinner is in the foreground. As I remarked a few days ago survival is the name of the game, which reminds me to start the next stockpile of toilet rolls soon. 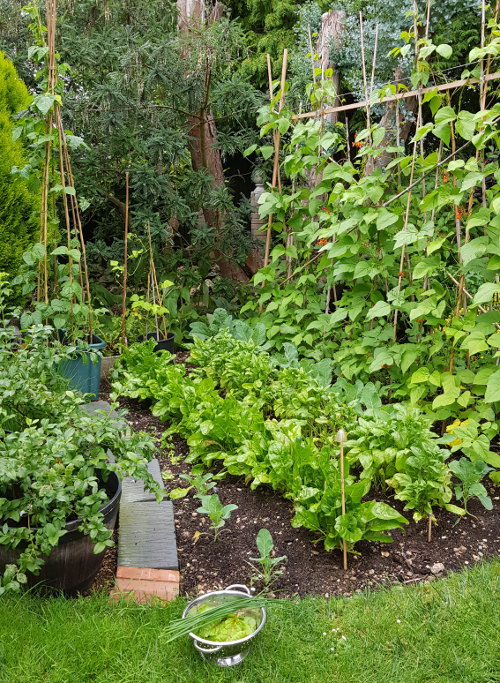 It seems as though our wannabe PM’s, the johnson’s, propensity for being absent, mindless and lying without compunction knows no limits. Surely the decision (because it must have been deliberate) to make a statement which at least appeared to backdate blame for care home deaths to the care homes themselves is not one of his best. The facts present a picture so incontrovertibly opposite to this that to even appear to imply care homes were responsible, even in a small degree seems almost suicidal. I think it is arrogantly deliberate. In fact I think all the lies, obfuscation, lack of transparency and apparent oblivion to public opinion is all deliberate and pre-arranged arrogance. The calculus I believe is that winning the next election is a given irrespective of the drop in the johnson’s popularity and that The Covid is merely a useful vehicle for distractive controversies which are being generated and exploited to misdirect public perception. Underneath the radar the government is planning a no-deal Brexit, as they have been from the referendum on whilst claiming the opposite, in spite of Parliament and public fears and are consolidating their grip on power in whatever way the can by, for example, political appointees in the civil service. Scrapping food standards, employee protection legislation and their commitment to human rights and equality is all to do with a US free trade dealnalso planned from the referendum. Constituency boundary changes are in their favour but their greatest advantage is an almost unlimited executive power to cherry pick or alter law needed to replace European regulations on exit which they acquired under Brexit legislation.

This authoritarian, arrogant government is creating an entirely new Britain with a new future and a great deal of interim upheaval. Those who voted for them are, in my view, going to rue the day they did that.
Posted by Paul Warwick at 18:08