BACK IN THE COVID - The Lockdown Diary Day 74

Tested negative! Of course we are so used to government systematically lying that no-one can be sure. We will wait and see when Alok Sharma surfaces. The press has not made much of the fact that showing symptoms, in this case a sweating fever, he should be isolating, should have contacted the test and trace service and should definitely not be in the House of Commons voting to improve the infection rate amongst MPs! He broke the lockdown rules.

Chlorinated chicken is coming, there will be a rebellion of sorts, farmers, many of whom voted to abandon European food standards and their monitoring agencies are now worried about cheap US competition. They voted for it and you cannot have both. This cheap source of food will be used to lower the cost of state school meals, meals on wheels and hospital meals. In other words anywhere it can be hidden in a pre-cooked format to raise profit levels in the food industry. You will eat it. You might not know when and where but you will. We will certainly need to #stayalert !

I wonder how many farmers expected that not only would they lose their market in Europe for beef but they would lose their home market to cheap, hormone fed , US beef. Farmers surely are not an overly bright lot.

On the subject of food, our productive garden is producing, the pondament as I am now calling it, has come on really well. Runner beans are running up the sticks, climbing beans are clambering up their poles, rhubarb is spurting its sprouts about, chard is charging up and lettuce is luscious already. Only the spinach is spindly but it is spinning along speedily behind. Here is the housewife out in the kitchen garden chivying the chives and picking a side salad for our chicken dinner last night. 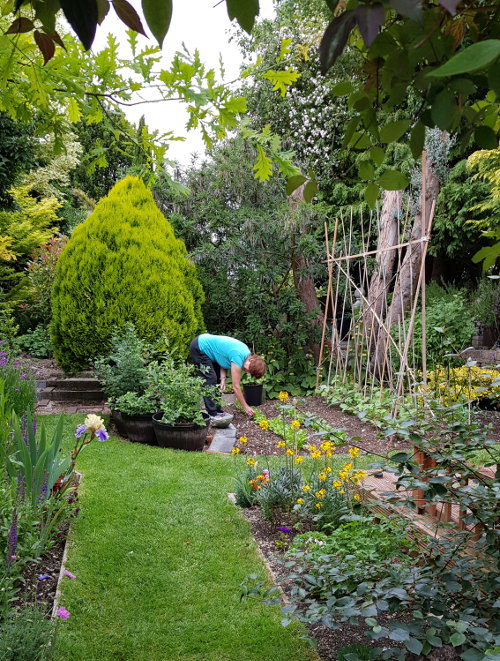 And so to return to the stories on my desk at last, and the fountain pens! Here is a closer view. Both of these pens represent a new and positive phase of our lives and therefore add much to the cache of peace and positiveness about my workplace.

The red pen, a classic Watermans, was purchased in W H Smiths, Cribb’s Causeway in December 1999. As writing pens go it was quite, but not exorbitantly, expensive. It has a matching biro pen which is more or less unused and as momentous as the approaching new millenium was that is not the new phase heralded by this acquisition. I had just resigned from a job in the nick of time. Having been made repugnant by my previous employer of 25 years I took a position just outside of Bristol in 1998, made too much of a success of it, got threatened with promotion and found it necessary to take evasive action. The threat of a more stressful job and the shear hell of my current 54000 miles a year driving being increased to who knows what was enough to convince me that painting and writing for the rest of my days was well worth every ounce of penury it was going to incur. I wrote my resignation letter, drove to Cribb’s Causeway (a shopping mall) to post it and presented myself with this luxurious pen and biro set.

It was a great decision to resign. I worked as a financial consultant for a while then took a retail job selling marine fish and aquatic systems in order to acquire some retail experience (I thought I might sell some art!) and two years later, in 2002, now pretty close to the earliest date I could take my occupational pension, and with an exuberant explosion of expletives directed at my bemused employer who had wanted to promote me beyond my inclination I gave one last definitive F*** you Steve and walked.

The black pen is a vintage 1950’s classic Montblanc Masterpiece 144. Such a joy to write with that I often take a blank sheet of paper and just write for the whole sensual pleasure of the feel of the barrel and its weight and the lively spring of its nib on the surface. I feed it with Diamine majestic blue ink which itself is pretty special.

A whole other lifetime came between 2002 and acquiring this pen which to summarise involved my wife and I between us in new and continuous, often separate, family care responsibilities for sixteen years until December 2019. Sixteen years which did not allow a great amount of time to paint or write or to do the simple stuff that retired couples like to enjoy. Now we are both free to enjoy the rest of lives until the next upheaval comes along but now at least we can be sure that whatever befalls, our responsibilities are just for each other.

The Covid is our first challenge but being in lockdown together has far more upsides than down. Onwards and upwards.