BACK IN THE COVID - The Lockdown Diary Day 79

If you search them out, rainbows are everywhere. I found this strange creature peering out at me from out of the television screen like a home grown version of the poltergeist. 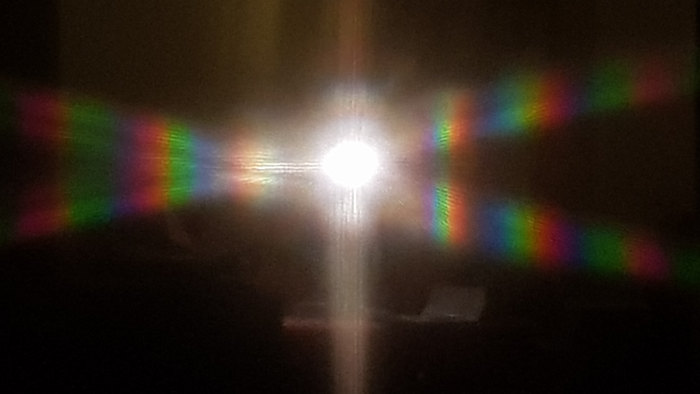 All rainbows are special things. To some portentous which is always a status that suggests an awesome phenomena is at work. White light is being split into its constituent parts, a continuum of electromagnetic radiation over a range of frequencies which falls into our visible range. However to actually see one you must also have a certain type of eye structure. We are lucky animals, we have it,  but unfortunately for others, gorillas for example, they are not so lucky, they have the wrong apparatus apparently and for them rainbows do not exist.

I have absolutely zero inclination to believe in signs lucky or otherwise but I love rainbows just the same. They induce an uplifting, heart warming feeling spontaneously, a commonly experienced reaction which alone might be responsible for their mythical symbolism. They remind me, every time I see one, of travelling home from work in Bristol to Swindon at 5pm in the late afternoon, a due east direction, with the sun setting in the west behind me in the rear view mirror. In the right sunny-rainy conditions a full rainbow, often a double and sometimes a triple would appear in my mirror view bridging the motorway and prominent in the reduced, reddened and stormy light. The day behind me ceased to exist at that point and a calm peacefulness was palpable.

Maybe this one should be called a tellybow?

I am bound to report that portentous or not this apparition heralded the good news that Farage has been taken off air unceremoniously by the broadcaster (LBC) where he was contracted for a weekly phone in radio show. His comments made during the Black Lives Matter demonstrations went a step too far. Why a known fascist, racist agitator should ever have been allowed to broadcast over one of the most diverse cities in the world is not something I will ever understand. This highly unsavoury individual who insulted Jewish class mates and sang neo-nazi songs in his school days (facts well documented) will go down as one of the most significant players in the political history of this period. Not because of his prominence as a politician or the size of his party but because he made today’s Tory party the extremist party it has become. In order to defeat the populist threat that Farage represented and retain their core vote they became UKIP in all but name and similarly populist. Led by the near fascist extreme of their party which gained in voice and prominence the Tories were eventually cleansed of moderate politicians like Ken Clark and Dominic Grieve and an extremist right-wing coup was completed with UKIP marginalised. Jeremy Corbyn joined in the anti foreigner sentiment by not dealing with inherent anti Semitic elements and an anti EU stance on Labour’s extremist wing and sealed the fate of the voices of moderation by becoming the handmaiden of Brexit.

The leaking of the BAME section of the Covid report today, the Black Lives Matter protests and above all the huge national debt of gratitude we owe NHS workers who largely emanate from ethnic minority communities add up to a powerful force for change.

Let us hope that Nigel Farage is finally put back in the nasty, vicious category where he belongs, shuffles off the British political scene and is followed by his racist apologists in the New Tory party.

Now that would have been a very lucky tellybow indeed.
Posted by Paul Warwick at 20:27