BACK IN THE COVID - The Lockdown Diary Day 15

Here we are then at the start of week three. More than 2500 persons have died of this dreadful illness, the NHS is undersupplied, in absolute chaos with inadequate personal protection equipment, staff shortages thanks largely to Brexit but also due to self-isolation out of fear and lack of testing. Meanwhile the government is flag waving for our beleaguered NHS whilst lying continuously in their daily reports. At the same time they believe, beneath it all, in the ideological objective of privatisation. It is tragic but as bad as they are the probable number of deaths in the UK will be far exceeded by those in the USA simply because their health system IS privatised but the expectation of this government changing its ideologal point of view is probably zero.

It was chilly outside today. The wildlife was unusually busy but more on that tomorrow. It was dry and it smelled of the spring, an olfactory experience as near as we can get to the smell of optimism. Frosts after tomorrow are not expected and the gardener’s year is off. The pond also is off. I have since quite a young man treasured the dream of making a wildlife pond and albeit slowly it was the next major job and was to be built this year. I had already marked out and nearly cleared the area. Covid-19 has stopped that.

I am not concerned too much. For me it was only a dream, one man’s loss and an altogether insignificant loss in comparison to the tragedy going on around us. So today I broke into the spring rhythm and began to dig that area with a plan to turn it over to vegetables. In the picture you can see how big the planned pond was and how much progress was made today. The soil in our locality is poor,  calcareous, dry and impoverished, so I am not at all optimistic about success but it just seems the right thing to do. This is not a war such as the war our parents lived through and fought in, but for our generation it is indeed our “war” so in my isolation I shall “dig for victory”. 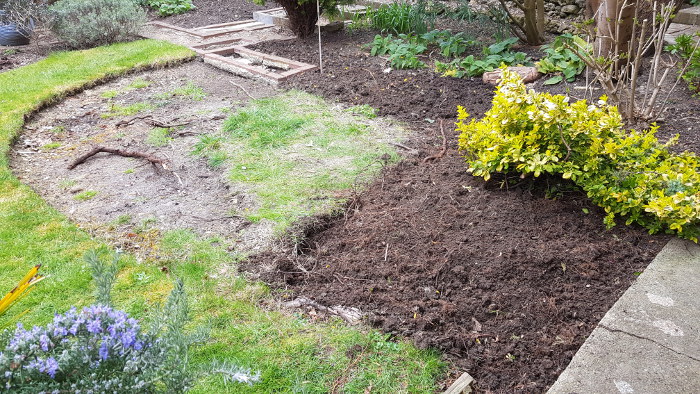