BACK IN THE COVID - The Lockdown Diary Day 35

It is the end of week 5. Today’s date is 20th May 2020. Today I managed to fit in some sun-bathing, had an hour in the wholesome, vitamin D stimulating, rays that emanate from from our star along with many other significantly dangerous electro-magnetic forms of radiation all of them more deadly than the from 5G radio masts and not one of them making Covid-19 more likely or more serious. I do wonder at both the gullibility of people and their ignorance but perhaps more at their lazy willingness to be so susceptible to mendacious charlatans. I wonder that but I am also reminded that mendacious politicians are elected to responsible office presumably by the same people. 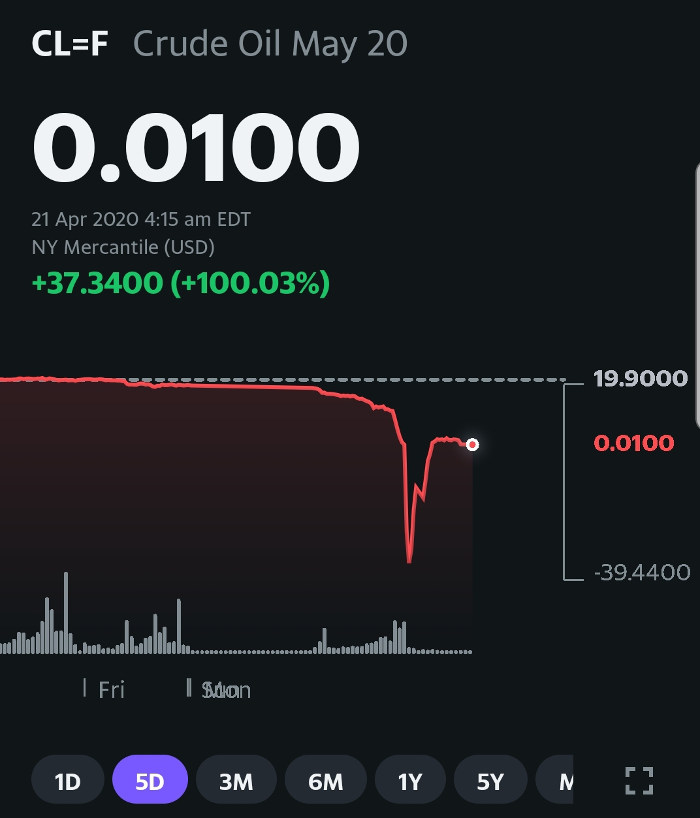 I record this image today deliberately, it is of such importance. No diary of these times should miss out today’s big event on the financial markets and yet for most people it will be a small piece of the history of these times that rush on by without notice. The spot price of oil for June deliveries went down to -$40 per barrel. Minus is a big deal. This means that traders were giving buyers $40 dollars a barrel to take away oil they could not get shot of any other way. It is the first time ever that the price has gone negative. The chart shows the point at which the price had recovered to more or less zero $. Free oil! Some of this is technical. Today was the day when contract completions fell due but there is nowhere left in the world to store the stuff so if you are forced to sell it and cannot find a buyer your only option is to give some free dollars with every barrel, $40 in this case, find a buyer to take the risk of having actual barrels on his hands and take the loss. A corollary of this state of affairs is that the shale oil industry which produces a barrel for costs in excess of $30 will effectively shut down, fracking is at an end, and Donald Trumps flagship policy of US self sufficiency in oil is in tatters. The price of oil will stay down, in my view for more than another 12 months at least. June contracts are being sold for around $12 as I write. It is a seismic change. The Russian economy depends on oil and prefers at least $70 a barrel, Saudi Arabia is much the same. The economic effects will be profound.

In other news today, the Blue Tits abandoned their nesting attempts, a Garden Warbler was spotted in the bushes, Kim Jong Un is rumoured to be gravely ill, the government lied again, my latest painting is coming along nicely and I hope to exhibit the other side of my body to lap up some rays tomorrow just as you do when you are holiday.
Posted by Paul Warwick at 20:32