BACK IN THE COVID - The Lockdown Diary Day 16

We are dredging every scrap of information, news, data and reports on the COVID-19 situation throughout the world. There is a great deal of it. Much of it ill-informed, mis-interpreted or so buttered up with political word salad as to be worthless. It should not be necessary at times like this to find yourself hunting down the truth hidden amongst the garbage spewed out by the Daily Wail and the Daily Distress and all the other media lie machines who have billionaire press barons to support through these difficult times. Sadly the value of objective truth has diminished and, in a crisis like this, conspicuous by its absence.  My feelings are exercised to say the least by the governments own continuous lies and cover ups. In particular desperately needed tests seem to be increasing by leaps and bounds in terms of the numbers promised but are effectively zero in reality. It seems that their way to avoid criticism of todays poor performance is to promise ever bigger numbers in the future, bigger than those that were promised for yesterday but never happened.

In spite of the tragic numbers coming out of Spain and Italy their crisis has peaked. In each case it took about 4 weeks. On that basis our numbers will get worse but there will be a peak and a reduction thereafter probably in the third week of April.

More news from the allotment tomorrow but here is the promised wildlife report.

It is interesting to note how connections work amongst our fellow residents in the garden. Mr. Woodpigeon is a randy bugger and is now attempting to serve two females on a regular basis, about every 20 minutes each during sunny periods. On the patio, on the roof, in the trees and amongst the shrubs and no doubt many other places around the garden which we cannot see from the window. The Mrs Woodpigeons 1 & 2 are not so enthusiastically driven by their hormones although they are regularly dropping eggs in flight. Mr. Woodpigeon however will not be detered easily and a flurry of feathers often results from his insistent overtures.

The Tits though are altogether more discrete and I am excited to report that we have our first nesting Coal Tits. We are not too sure at the moment if they have won control of the nest box, there is competition from the Blue Tit population, who were understandably peeved since they had so beautifully lined it out last year. It surely must be a cosy little nest in there and most of it thanks to Mr. Woodpigeon’s uncontrollable urges covering the garden with the finest stuff from The Mrs. Woodpigeon’s 1 & 2 brood patches.

Just managed to capture a distant and blurry shot of Mr. Coal Tit after delivering his nest material. Mrs Coal Tit is inside. 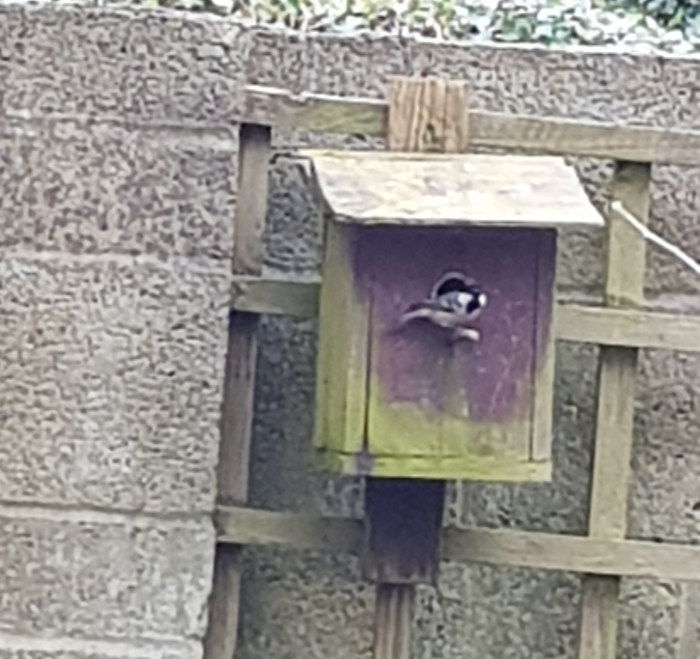