BACK IN THE COVID - The Lockdown Diary Day 61

Emma Thomson appeared on Mary Beard’s TV show yesterday. Mary Beard is certainly a queer old dear in many ways but I find her willingness to press the question that no-one wants to give a straight answer to without giving ground is intellectually quite refreshing. Emma Thomson, more well known for appearing before the camera but also a script writer, gave a little lockdown rendition, aided by her husband, of a part of her setting, as yet still in the pipeline, of the screenplay Harrow Alley originally by Walter Brown Newman. This is set in the year of the Great Plague and the whole point of her piece was to highlight parallels with The Covid which we are living through today.

It was remarked that Newman must have found his inspiration in part from Defoe’s work ‘Journal of the Plague Year’ and since I have a comprehensive library of literature from the 18th/19th century I could immediately lay my hands on a copy, did so last night, and have not been able to put it down since. 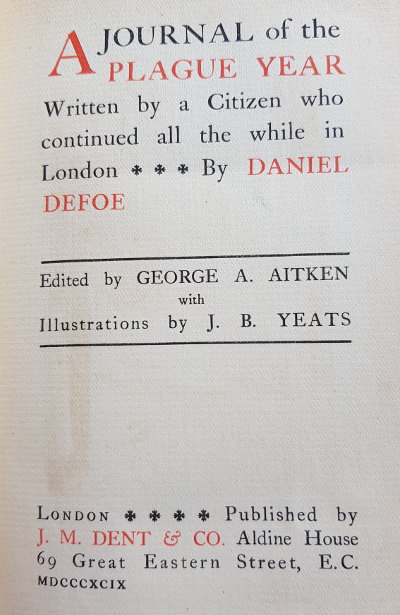 Defoe’s book is disarmingly written in a straightforward, matter of fact style, which gives it an atmosphere of realism  greatly adding to its power. It was so widely regarded in its day (it was published in 1722, The Great Plague year was 1665) that later professionals in diseases used it as a reference and it is still today a primary source of how life was conducted in London during that dreadful tragedy.

As a little diversion, my reading has been enhanced a little (as I see it) by the fact that this late 19th century edition has never been read by anyone in the past. There is always something slightly thrilling about opening an old book that has never been opened in earnest before. As I go along I am obliged to set the words free as it were by slicing the uncut edges apart with a sharp knife before I can continue. 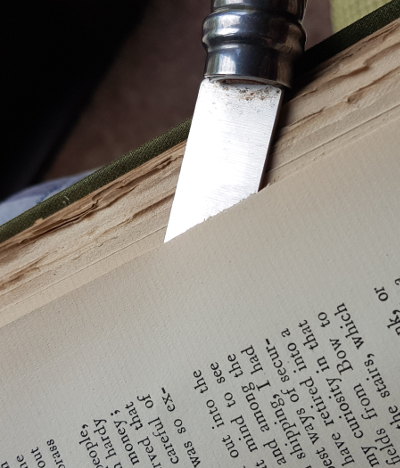 Our Covid lockdown has recently been relaxed a little but has encouraged those whose motivation is purely self-interested and hedonistic to get round rules rather than act in the interests of society as a whole and accordingly to descend in vast numbers on holiday resorts for days out. In the process they have put local inhabitants at great risk and greatly increased both the potential and size of a second wave.

The first few pages of Defoe’s work struck me immediately when I read this:

“Had most of the people that travelled not done so, the plague had not been carried into so many country towns and houses as it was, to the great damage, and indeed to the ruin, of [an] abundance of people.”

Lives, living standards, housing, education, technology, health and health care, so many things change and improve as time goes on but human nature it seems is stubbornly unwilling to understand the importance of also improving our underlying values when it comes to caring for the rest of humanity even when that equates to saving our own species from harm.
Posted by Paul Warwick at 16:24