BACK IN THE COVID - The Lockdown Diary Day 21

Mr. Johnson is stable apparently and I am pleased for him. I will not go outside and clap. I cannot in good conscience single out for honour one man’s fight against this disease when there are so many others in a much worse state or dead especially when that one man’s policies do not seem to have been directed towards reducing suffering but reducing economic damage. This one individual has headed a party responsible for extensive suffering over 11 years. I wish him well for his recovery but have very little confidence that he or his party wishes anyone else well.

The old trouble and strife is on the final stages of restoration of her fine rustic 19th century clothes horse. You might be interested to know that early in the 19th century a dandy or its female equivalent, a quaintrelle, when used as a living thing on which to hang stylish clothes for display, was called a clothes horse. Back then this would probably have been called a clothes drier. How silly. 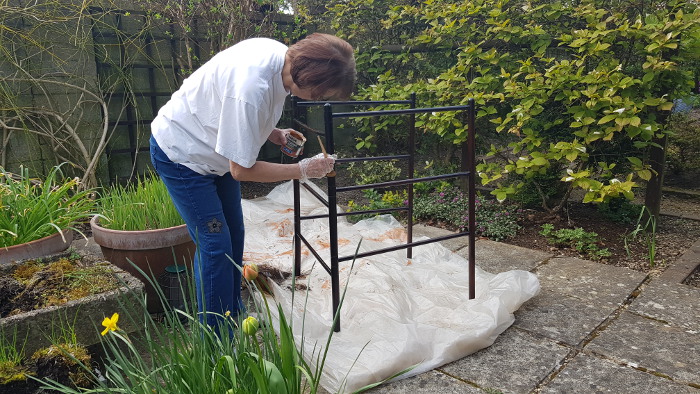 Today marks the end of the our third week in lockdown. The weather was absolutely glorious and a deal of little jobs were completed around the place. Spring has sprung and at this time the birds need their feed topped up, garden hoses are dragged out of winter storage and unkinked and tomatoes are planted in their permanent greenhouse beds. All ticked off today. It feels almost too normal, so much so that surreal is a better word. These times are anything but normal and today I found myself musing on whether life would ever return to how it was. You can bet your life that there are corporate executives out there marvelling at how all their businesses still function when their hugely expensive office blocks in London are practically empty apart from them in their executive suites. No doubt they are calculating how much they can save on rent if none of their employees actually return and I would bet technology directors everywhere are busy making working from home the new norm.
Posted by Paul Warwick at 20:51