BACK IN THE COVID - The Lockdown Diary Day 45

 Air quality has noticeably improved. It struck me today with some force that it reminded me of how it felt when I was a youngster.

“It will be alright in the end” was my father’s favourite saying in response to any of life’s downturns. “It” was anything and everything no matter how insignificant or how momentous. “End” was never quantified or quantifiable being a nebulous state of affairs in some distant future time when everything was indeed “alright”. This is an unassailable, tautological kind of optimism to be recommended and accounted for his indomitable, positive outlook in spite of suffering the mental scars acquired from his part in the liberation of Belsen. Dad’s optimism rewarded him with a never ending supply of futures which were “alright” which is why even at the age of 94 and already quite unwell in many ways, including dementia, he spent his winter months planning next years garden projects and sending off his plant and seed orders.

His own father collapsed with heart failure (thanks to the Kaiser’s mustard gas) whilst working on his allotment and Dad took his father’s allotment on at the age of 11 to keep vegetables on the family table. Naturally feeding his new family in the 1950’s necessitated taking on another allotment which was not far from our house on the other side of the river Ray at the bottom of Westcott  recreation ground. We would go down there together, always Saturday or Sunday afternoons, Dad trundling his homemade wheelbarrow and tools the length of the Wootten Bassett Road to the Running Horse pub, which is quite some distance, and me, knee high to a frog hopper, trotting beside him trying to keep up. Later we would trundle back again with the results of his labours; beans, cabbages, peas and enormous sticks of rhubarb.

His plot ran north-south on an angle in the corner by the river and backed directly onto the steel fence which enclosed the railway embankment. The river always flowed then, its banks lined with trees, cow parsley and tall grasses. Brambles from the embankment encroached from the back of the allotment and crept around a tiny shed tucked up against the steel fence where he stored the essentials, canes and dibbers, string lines, smaller hand tools, watering cans, seeds, plant labels and a primus stove to brew his tea.

Today I planted a row of spinach and erected my climbing-bean frame in the manner I had learnt  more than 60 years ago, slowly, deliberately, tying tight each lashing so as not to come loose in the wind or fall apart under a weight of beans and securing a diagonal cane each side for rigidity just as taught. For those two hours I was a youngster of 8 years old again. I had struggled back from the river bank with a watering can too full to carry and sat a while on the little seat by the loganberries up against the shed now redolent of bonfire smoke, earth, potatoes and dried onions. The bonfire smoldered in front of me consuming couch grass clods which so plagued the area and the thinnest wisps of smoke rose up untroubled by any breeze. I breathed in the fresh, clean air mixed with the aromas of bonfire, old cabbage, shed and river and drank of the kindness, warmth and nourishment that characterised British weather back then.

My Dad was digging his bean trench and whistling. 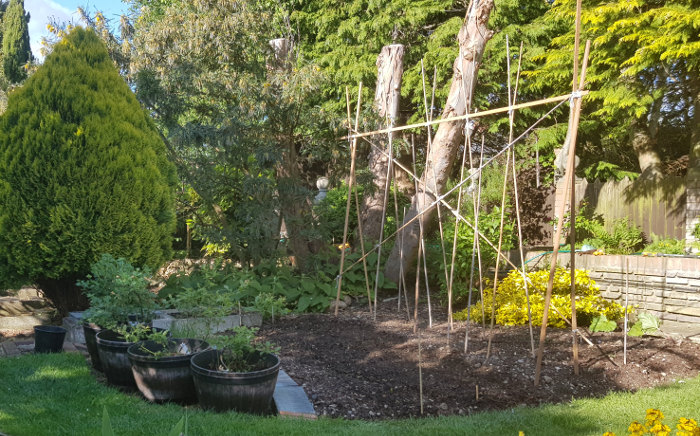