BACK IN THE COVID - The Lockdown Diary Day 62

Hedgehog shit remains illusive. Snoring in the daytime has stopped. We believe he/she has moved. Apparently hedgehogs can move nest up to four times over a winter.

What appeared to be a female Yellowhammer took off from the very top branch of our neighbour’s tree two doors up and flew due east which means that she added herself to our bird list. Male Yellowhammer has been singing his little-bit-of-bread-and-no-cheese cheeriness from the Lime trees round the playing field opposite for some time but to count for the ‘Natural History Of Our Place’ it must have been recorded within our boundaries. This is, if you can imagine it, a tube disappearing off into outer space to infinity at an angle normal to the surface of Earth on a line passing through it’s centre.

Dominic Cummings has broken lockdown law but, since we now live in a dictatorship, will not lose his job. Many who have been fined for the same offence will probably seek the return of their money or at the very least remember their financial loss at the next election in 2024. That is if we ever have another election. The Lockdown is effectively over for that half of the population who care only for themselves. For the rest of us nothing will change we wait in some trepidation for the second wave which is now all but guaranteed to be even worse than the worst already anticipated.

Trump has been taking an unapproved medicine to protect himself against Covid-19 which has been proven to increase the chances of death if you have Covid-19. It is a curious habit of nature that it ensures idiots generally harm themselves more than sensible folk in what seems to me to be a natural reinforcement process to lower the workload on the mechanisms of evolution. I am just floating this out there but I have a theory that since goodness in the societal or human sense contributes to the survival of a species over the long evolutionary term so the bad guys will eventually die out. Incorrigible and perennial optimists enjoy a most comforting state of mind. It keeps hope out of intensive care and us hanging in there for better days ahead. At the time of writing there were 241 days, 15 hours and 41 minutes left for Trump in office. Not long to go.

The new garden productive area is looking productive. It needs weeding now, pretty badly, but the regimented rows of beans, spinach and shard make that a task which can be performed without mistakenly pulling the wrong thing up. I could get ‘er indoors on it but she’s busy pro tempore on the fence painting. We are severely short staffed. Credit where credit is due though, fences look great and she can do it again in the future. 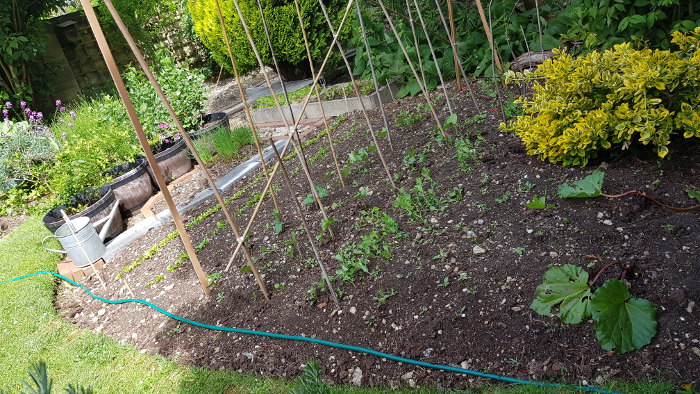 I am forecast to complete the last painting in my ‘allegorical figurative’ style today entitled “But for the Lovers”. I just need to add the rainbow and a very small white square.