BACK IN THE COVID - The Lockdown Diary Day 32

Lockdown day 32 is off to an excellent start. I must remind you that our lockdown day starts at 2pm.  My chronology might otherwise seem a little awry from your angle. I continued wasting more time doing nothing apart from a few skirmishes with a paint brush for an hour or two and made concrete plans quite early on to continue in that vein because I was enjoying it so much and getting far too relaxed for my own good.

Paige and Jonny, our granddaughter and her partner, came round for one of regular cribbage matches!

I had an idea that we could, with the help of a video chatting application on our computers, work out a method of playing our favourite game and not continuing to miss out. Their visits are one of our social highlights and a tonic in normal times so a serious attempt at making this work had a lot of attractions. To start with I would get more of my fair share of the crisps for a change. (Think about it!). After some discussion we made contact via Facebook Messenger from a tab in our case and a laptop at Paige and Jonny’s and set ourselves opposite them on our dining room table just where they would have sat had they been with us. You can make them out in the photo on my tablet and hopefully see how we are set up.

I can report that it works. It is possible and worth a try. Perhaps with another game but cribbage is definitely amenable to socially distanced card play. We had a really amusing game lasting longer than usual, about and hour and half, but we rose to the challenge and I think, in the end, actually got into the swing of it. We would normally play best of three sometimes five but this time best of one all we could fit in. Paige is actually busy gestating our 6th great grandchild and too much excitement would not do. In any case as usual much of our time was spent gassing instead of playing.

Give it a go. I strongly recommend it. Maybe start a family league and spread the amusement about for everyone! Messenger works a treat but other apps might do better. Zoom is time limited in its free form but Houseparty is worth a try or Whatsapp perhaps. Best of all we WON! So it’s 4 each in our regular sessions which carry on regardless and next week there is all to play for.

How to play lockdown cribbage 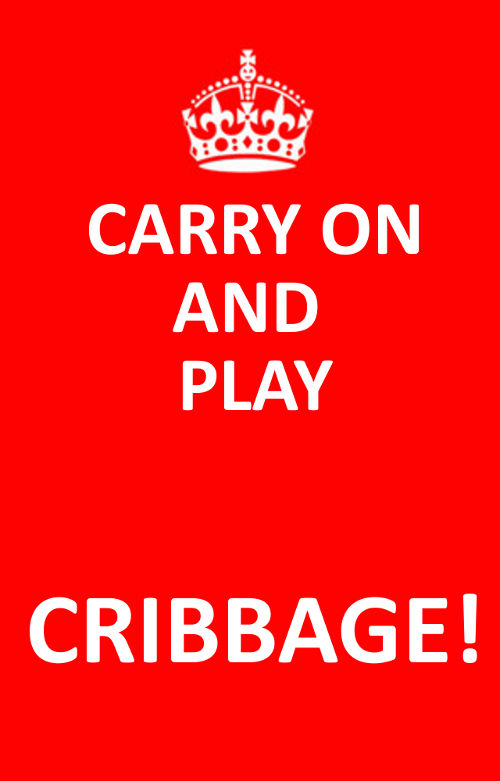 You need in each house (apart from your goodselves, a modicum of patience and a sense of humour each) one tablet, lap top or desktop PC set up opposite you on a table about 6ft away with the screen propped up slightly falling forward so that your opponents can see both the table in front of it and you sitting opposite. (note for the tech savvy, you also need to be running the Facebook app from a Chrome browser if you have a windows device because messenger will not work in Microsoft Edge browser) . A cribbage board set on a slope so that your opponents can see it and that you are not cheating or forgetting to peg for them! And a pack of cards for each player.

Cut your pack of cards to decide who goes first in the usual way. If the same card wins, cut again.
The dealer deals from his pack of cards the four hands in front of him face down on the table.  5 cards each. The dealer shows the cards facing away from him and towards the screen to the player opposite in the other house while he and all others look away from the screen. The player writes down his cards and sorts them out from his own pack. The dealer repeats this for the second player in the other house. These cards remain face down on the table for the duration of play. Each house puts one of the cards in the half-a-box at their house. The dealer then flicks through the remaining pack and the player on the right of the screen shouts stop for the turn up card which must be the top card of the bottom section (as if they had been cut).

And that’s it really. Play proceeds as normal (except for a complication I shall explain shortly) with the host house scoring for the other team. We found that holding the cards up for viewing helped.

So here is the complication. Normally you would sit diagonally opposite your partner. We could not work out a logical answer to this conundrum. In the dealing we ignored it but it matters in the order of play. Our solution was to play Z-wise I.e. in the right order for the teams. It was hard work keeping on track. Luckily we had Paige’s accountant’s brain to maintain discipline but a better idea is  well worth some thought.
Posted by Paul Warwick at 20:22