BACK IN THE COVID - The Lockdown Diary Day 41

Nothing. Working in the studio today because rain. Working on the coda to my Symphony No. 4, “The Allegorical”.

I cooked last night, I often do. My wife does most of the cooking in our household largely because she always has, is a damned good cook and there is generally a greater chance of it being edible if she cooks it. When your victuals are at stake the laws of probability are king. Today however I cooked and that was because for a few weeks now an unused and hot looking bottle of harissa paste kept saying to me every time I investigated the snack cupboard “Cook with me, cook with me, you know you want to!” and I did want to, I did, so here I present my sausage and chicken tray bake with a garnish of herb and garlic chickpeas. 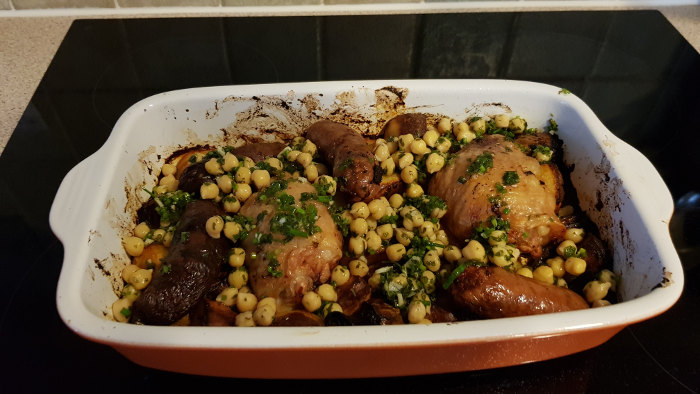 I am not watching any news tonight. It seems that the number of deaths from Covid - 19 are at last reducing but the paucity of human care exhibited by this government is just appalling and I need a break. Fortunately the press or some parts of it have woken up to the idea that they might have been hoodwinked into thinking that Tories can be nice people and to be governed by them is okay. How did we become a country that is prepared to sacrifice our grandparents in care homes to benefit the economy? How do you justify sending kids to school to collect a sample of Covid for them to take home and kill their grannies with? What kind of government has a major dry run for a pandemic (operation Cygnus 2016), finds major shortcomings so knows what to do and does nothing?  What kind of government hails their success in reducing shoplifting at a time when all the shops are in lockdown? What kind of government puts advisers on scientific panels then exploits that knowledge by handing out contracts to their mates? What kind of government needs to hide from scrutiny and exclude some parts of the press for asking awkward questions?

This is not government or leadership as I have known it for all my 71 years, Labour, Conservative or Coalition. It is a travesty and it will hopefully backfire on those responsible. In the meantime however, the deaths are piling up especially in care homes and it is the most vulnerable who will needlessly suffer while those in office of whatever party who hold themselves above the general throng play with their sterile ideologies.

To quote Frankie Boyle “You have got to feel for Tory voters who thought they were only fucking up lives for other people”.
Posted by Paul Warwick at 20:52